I bought a keyboard for my phone

We live in the glorious age of touchscreen computing. Phones and tablets have got rid of clunky, clicky limited physical keyboards in favour of being all-screen, all-adaptable. Builtin keyboards are missed by few. Of course there are still cases where a keyboard just can not be beat. Those times where you want to get ever so slightly longer texts or thoughts written down quickly it is very hard to argue against a decent full-sized physical keyboard.

Which brings me to the subject: the Logitech K811 "Easy-switch keyboard". 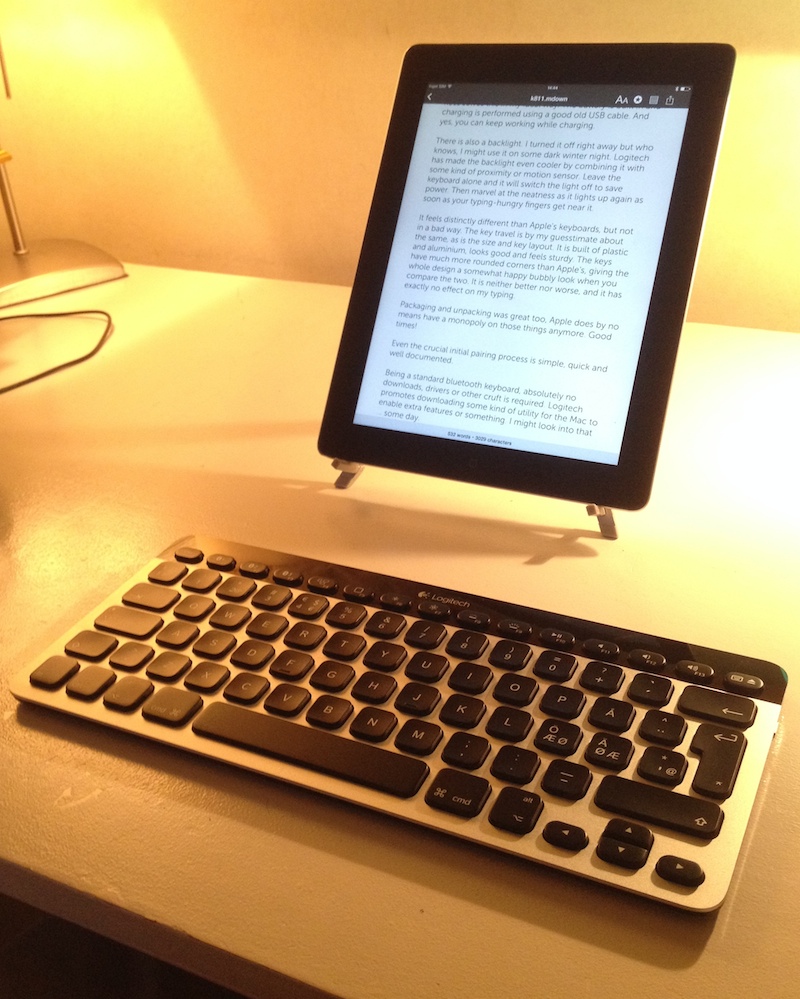 Well, no. I do have Apple's bluetooth keyboard too, but it has distinct disadvantages. Or rather, the K811 has some very thoughtful features which make it so much better for many situations.

First and foremost is the easy-switch part. The K811 can be paired with up to three devices at once. Selecting which device to use is a single button press away. This makes all the difference. Pairing bluetooth devices is pretty quick and painless, but having to fiddle with settings each time you want to type to a different device quickly guarantees a keyboard will stay connected to one thing at all times. I know, I keep my Apple keyboard paired with my media Mac mini and have used it with other devices about … once.

There are more neat features to the K811 though. I really dislike changing batteries (or the very thought of something running out of juice all of a sudden) and the K811 solves this in my ideal way. The battery is built in and charging is performed using a good old USB cable. And yes, you can keep working while charging. 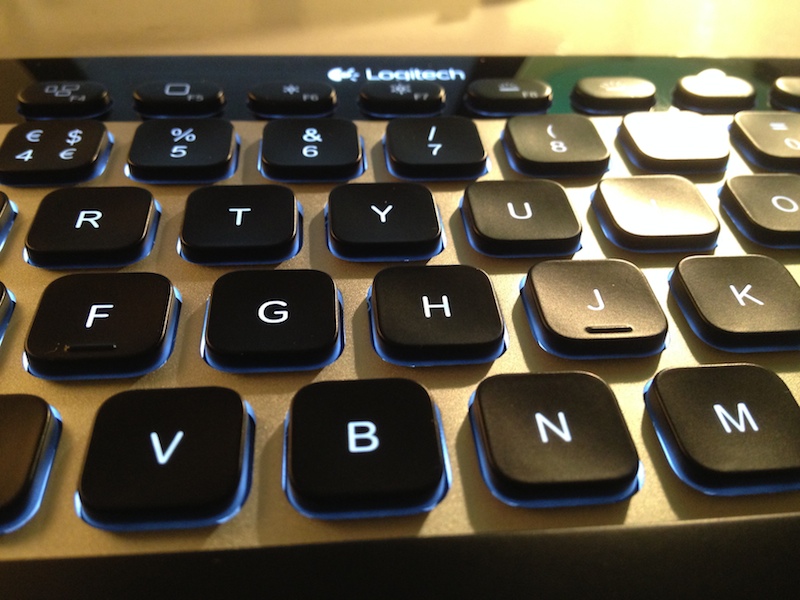 There is also a backlight. I turned it off right away but who knows, I might use it on some dark winter night. Logitech has made the backlight even cooler by combining it with some kind of proximity or motion sensor. Leave the keyboard alone and it will switch the light off to save power. Then marvel at the neatness as it lights up again as soon as your typing-hungry fingers get near it.

It feels distinctly different than Apple's keyboards, but not in a bad way. The key travel is by my guesstimate about the same, as is the size and key layout. It is built of plastic and aluminium, looks good and feels sturdy. The keys have much more rounded corners than Apple's, giving the whole design a somewhat happy bubbly look when you compare the two. It is neither better nor worse, and it has exactly no effect on my typing.

Packaging and unpacking was great too, Apple does by no means have a monopoly on those things anymore. Good times!

Even the crucial initial pairing process is simple, quick and well documented.

Being a standard bluetooth keyboard, absolutely no downloads, drivers or other cruft is required. Logitech promotes downloading some kind of utility for the Mac to enable extra features or something. I might look into that … some day. 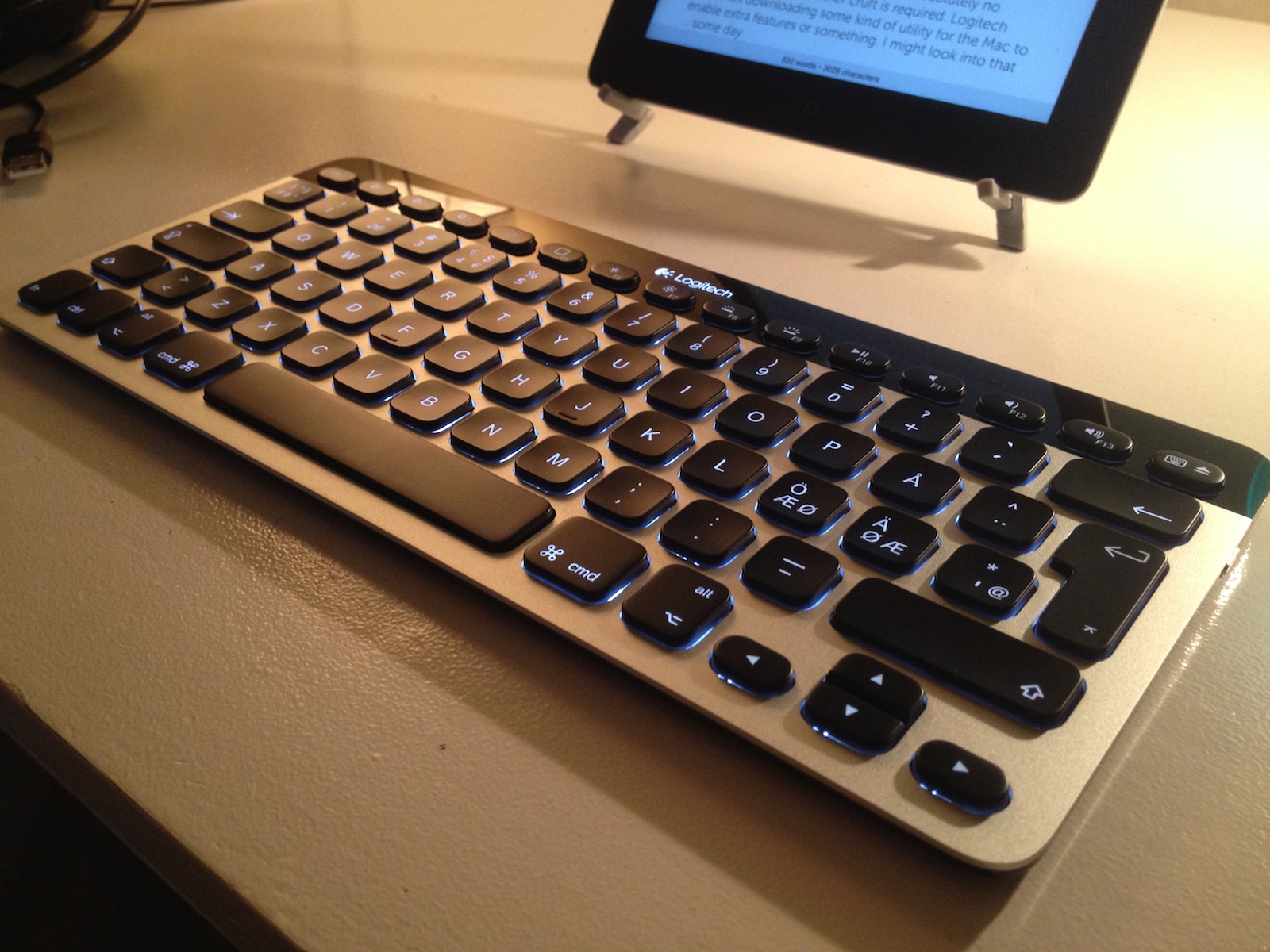