My sister (thanks so much!) gave me two types of unroasted coffee beans for my birthday this year. A week later I tried my hand at the noble art of roasting coffee beans for the first time. The process is delightfully, perhaps deceptively, simple:

My goal after my little studying and thinking was to go for a pretty light roast to get more of bean flavour and less of just roast taste. Aiming for the first crack seemed like a good way to go about this. As beans heat up they begin popping like popcorn. That is the first crack, and it can also be followed by a second one. The second crack is said to be the dividing point between medium and dark roasts.

I heated the oven up to around 220 degrees like some recommendations said, put the beans in the middle and set a timer for twelve minutes. Once light popping begin I opened the oven for a little while to lower the temperature - something I had also seen recommended. Then, I just waited until popping was slowing down, after which I waited a little bit longer as only about five or six minutes had passed and I was unsure of just how short you can cut roasting. By the time I took the beans out they had been in about eight minutes and were surprisingly dark and oily. 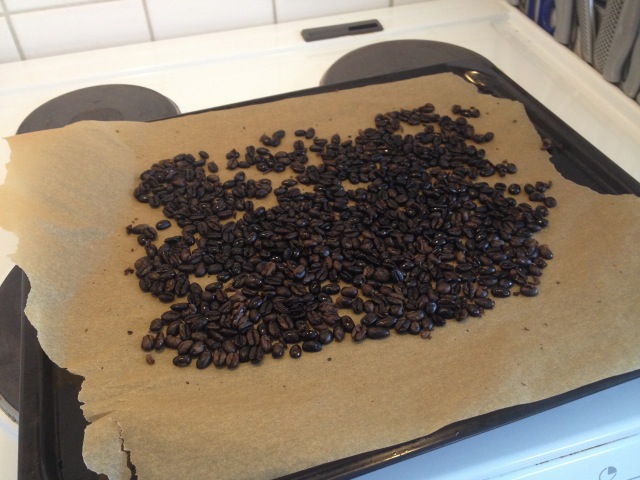 By the descriptions on Wikipedia almighty, it looks more like I landed on a French roast than anything else - dark brown and shiny with oil. I am wondering if I had too high a temperature and screamed right through first crack and almost through second before I put an end to the process.

Oh yeah, and perpare for smoke

I had both read and heard plenty of warnings about oven roasting producing quite a lot of smoke. So I turned up the fan, opened the window and tried to go easy when opening the oven to not let too much out at once.

Still, when I removed the beans the fire alarm went off and the kitchen became a bit misty for a while. Some fights you can not win.

It felt like my grinder had to work a bit more with these beans than usual. My first thought was that it had something to do with the oiliness of the beans compared to the other ones I have used, but now I wonder if the thing is that these beans are somewhat larger and lighter and so simply funnel through the machinery slower. I do have to run the grinder longer for a certain amount of beans, and it is running quite hich-pitched much of the time, the way it does when it does not have much to chew on. 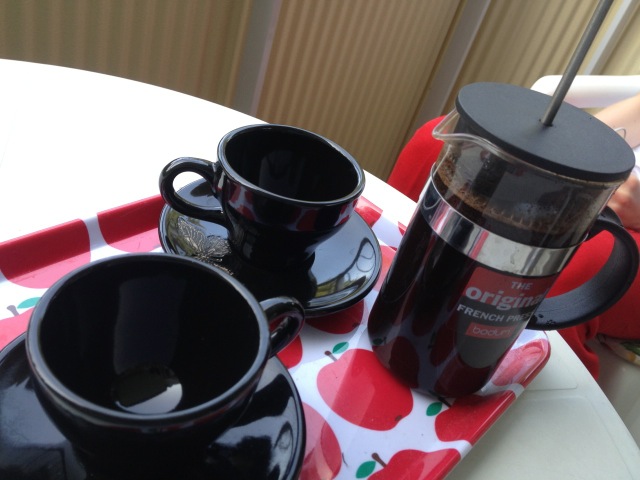 The resulting coffee definitely feels like a dark roast. The taste is very, very earthy. I imagine it has a bunch of that which people call ash when they speak of dark roasts.

What I think I will do next time is go for somewhat lower temperature, about the same roasting time and perhaps lower the temperature a bit more by opening the oven more once the cracking begins. And be quicker about removing the beans from the oven once cracking slows down too.

The thing that matters is this: now I have a nice jar of freshly roasted beans in the kitchen cupboard, marked by date and roasting time, as well as a fresh set of ideas for what to try on the next batch.

My medium term hope is to become good enough at roasting that I will become totally spoiled and unable to enjoy any other type of coffee. Being able to easily say no to various types of motor oil at work and elsewhere would surely do no harm to my system. 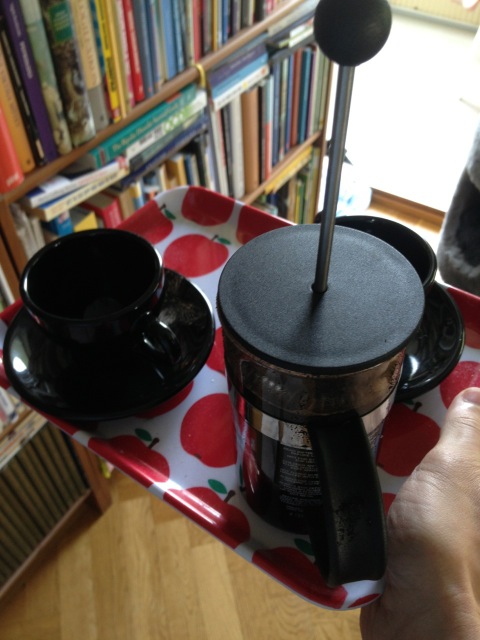 More to come, for sure!